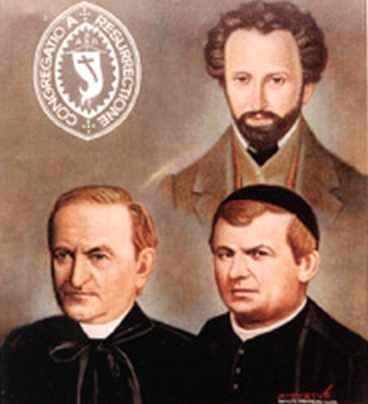 Bogdan Janski: 1807-1840 a Polish economist, who after a
dramatic personal conversion envisioned a community that would
later evolve, after his death, into the Congregation of the
Resurrection. A charismatic personality, Janski attracted several followers, most notably Peter Semenenko and Jerome Kajsiewicz,
and together they established a common life in Paris on Ash
Wednesday, February 17, 1836.

Peter Semenenko: 1814-1886 a Belarusian, who after living in the
Paris community, went to Rome together with Jerome Kajsiewicz to
study for priestly ordination. Following ordination in 1837, Semenenko
distinguished himself as a spiritual director and consultant to the
Vatican. He also composed the first Rule for the Congregation of the
Resurrection.

Jerome Kajsiewicz: 1812-1873 a Lithuanian, served as Superior General of the
Congregation in its formative years. A dynamic preacher and writer, Kajsiewicz was
instrumental in initiating the Congregation’s missionary activities and outreach.

The Congregation of the Resurrection is a religious community of priests, permanent deacons and brothers serving in parishes and institutes in the following countries of the world:  Australia, Austria, Bermuda, Bolivia, Brazil, Bulgaria, Canada, Germany, Israel,
Italy, Poland, Slovakia, Tanzania, Ukraine and the United States. The Congregation is organized into three administrative provinces (Ontario-Kentucky, United States of America, and Polish) and one region (South American), with the General Headquarters located in the city of Rome, Italy.

Founders’ Beatification Prayer
O Risen Jesus, you called Bogdan Janski, Peter Semenenko and Jerome Kajsiewicz to proclaim your unconditional love for all people and witness to the Resurrection by dying to self in order to live a new life by the power of your Spirit. Glorify your servants by the way of beatification so that the example of their lives after conversion may bring the hope of Resurrection to all who continue to struggle with sin, error and their own human weakness.