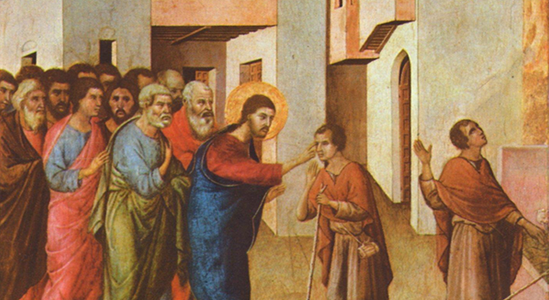 “You missed the point,” we might be tempted to shout at the servant in today’s Gospel. His master had just forgiven a huge debt when he cried for mercy, and yet, when given the opportunity to show mercy himself, he instead acted violently and with retribution toward a fellow servant. Certainly, he had missed the point of his master’s merciful actions toward him, and suffered the consequences as a result. He missed the point. He is not alone, however. We all “miss the point” sometimes— we miss the point of God’s enduring covenant of love, and miss the mark in our call to live as though we are the Lord’s, for this is who we are.

When Peter asked Jesus how many times he must forgive, he was probably stunned at Jesus’ response. Peter had asked, “As many as seven times?” Seven being the perfect number, surely this is enough forgiveness, Peter likely thought. Jesus’ response seems lavish beyond proportion. “I say to you, not seven times but seventy-seven times.” Jesus understands the fullness of God’s mercy and teaches that disciples are called to this same lavish outpouring of mercy. God showers compassion on humanity, beyond what might seem sensible or wise, yet we are called to “remember the Most High’s covenant, and overlook faults,” to give others the benefit of the doubt, knowing that God does this and more with us, each and every day. As recipients of God’s compassion, we must extend forgiveness and care beyond what might seem reasonable, because God’s love is beyond human reason.

HOW MUCH IS TOO MUCH?

All this might seem just too much for us. It is one thing to recognize God’s enduring covenant love. It is another to grasp that we are called to the same sort of lavishness in mercy and forgiveness ourselves. Saint Paul helps us put this in perspective. We no longer live for ourselves, but for the Lord. In life and death, we belong to God and are called to be witnesses to God’s love, even in the most challenging circumstances. A friend turns away from us; we are called to turn toward the friend with mercy. A co-worker hurts us; we are called to approach him or her with forgiveness, seventy -seven times no less! God’s love is always about what is just and right. As God’s people, we live and die for the Lord, forgive even when it doesn’t make sense to do so, and leave the rest in God’s hands